What is Ashtanga Yoga

If you are new to Yoga this may be helpful

“Yoga” is a Sanskrit term derived from the root word yuj which means to harness or to yoke.  In The Shambala Guide to Yoga, the Indologist, George Fuerstein, defines the term “yoga” as meaning both union and discipline.  In India, yoga encompasses a range of spiritual practices which are intended to enable the practitioner to realise their inner spiritual nature.  In so doing, the individual is believed to unite with the divine energy held to underlie the universe.  These practices include both mental and physical exercises and are based on the widespread recognition in Indian philosophy of the close relationship between thought and behaviour, mind and body.

The Indian yogic tradition is several thousand years old and incorporates various schools of thought and practices.  However, much of the yoga practised in Europe, the United States and Australia is derived from one particular tradition called Hatha Yoga. Specific physical exercises are performed to strengthen and cleanse the body in order to promote mental clarity and spiritual insights. A key Hatha Yoga teacher this century was Krishnamacharya (1891-1989); some of his most influential students (as far as western yoga is concerned) include his son Desikachar, who developed Viniyoga; B.K.S. Iyengar, whose Institute in Poona has trained many European and American teachers; and Sri K Pattabhi Jois, the living master of Astanga. Together with his grandson Sharath, Pattabhi Jois was teaching at his Institute in Mysore until his death on May 18th 2009. For more information please see http://www.kpjayi.org 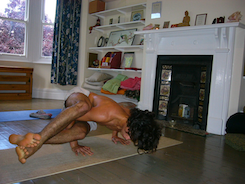 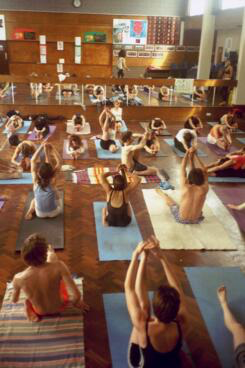 In India, yoga is predominantly viewed as a spiritual discipline.  Both Pattabhi Jois, in his book Yoga Mala, and Iyengar, in his book Light on Yoga, emphasise that observance of a moral code and mental discipline should precede the practice of yoga postures and breathing. Indeed, the word ‘Astanga’ literally translates as eight limbed and refers to the eight components of the yogic path laid out by Patanjali in his Yoga Sutras (200 A.D.). These include ethical disciplines, self-observation, posture, breath control, sense withdrawal, concentration, meditation and equanimity. However, in Europe and America, yoga is commonly adopted to facilitate health and fitness.  Initially therefore emphasis is placed on postures and breath control as a means of enhancing strength and flexibility.  It is only subsequently that regular practitioners discover the subtle effects that yoga has on all aspects of life.  A greater awareness of the body also causes the practitioner to become increasingly sensitive to the impact of their actions and lifestyle on their encompassing social and natural environment

Ashtanga Yoga is a dynamic form of yoga in which asanas  are linked in a flowing sequence through careful synchronisation of deep, regular breathing that uses the whole lung capacity.  The standing asanas particularly focus the practitioner’s awareness on balancing weight equally on both legs, extending the spine and opening out the chest.  This in turn encourages the practitioner to breathe more fully and to release tension in the neck.  Emphasis is paid to the gaze, or dristi, and so in each posture the gaze rests softly on a particular point.  This encourages focused attention and a quiet mind.  Finally practitioners are encouraged to apply internal locks, or bandhas, the most important of which is the moola bandha.  Here the muscles of the perineum are subtly drawn upwards, thus sealing the energy within the body and guarding against injury of the lower back and groin.  The bandhas, ujjayi breath and flowing sequence of asanas combine to create considerable internal heat which increases physical flexibility and facilitates internal purification through the sweating out of toxins.

The physical benefits of regular Astanga practice include improved circulation, increased oxygenation of the blood, greater strength and flexibility in muscles (especially core muscles) as well as spinal flexibility and improved posture.  In the USA scientific research projects are underway to investigate the effects of yoga on specific ailments.  For example, the National Centre for Complementary medicine is funding research into whether yoga can alleviate symptoms of multiple sclerosis.  Research conducted by the Northern Colorado Allergy and Asthma Clinic suggests that yoga not only increases oxygen levels in patients with chronic obstructive pulmonary disease but also alleviates symptoms in asthma patients (reported in Yoga Journal, Winter 2000 issue). In the UK, similar research is carried out by the Yoga Biomedical trust, which was established by Cambridge biochemist Dr Robin Munro.  Munro claims that yoga therapy can help with conditions ranging from low back pain to diabetes, migraine and high blood pressure.  Linked to the Trust’s research are specialised therapeutic yoga courses for back pain, arthritis, asthma, multiple sclerosis and cancer. These are offered by the Yoga Therapy centre, established in 1993 and which used to be at the Royal Homeopathic Hospital in London.

The more subtle benefits on the psychological and spiritual levels are as important as the physical benfits.  Astanga yoga can be described as a moving meditation.  The focus on ujjayi breath, bandhas and drishti serve to still the mind, creating inner calm and a more spacious perspective which eventually permeates other aspects of the practitioner’s life.  Particularly important in this respect is savasana, the corpse pose, performed at the end of a yoga session.  Consisting of ten to fifteen minutes of total recumbent relaxation, this pose allows the breath and heartbeat to slow rigth down.  It enables the practitioner to consciously focus on, and then let go of, areas of physical and mental tension held in the body.  In the context of the rapid and pressurised pace of life in urban industrialised society, corpse pose can be one of the hardest postures for some to do.  People are reluctant to give themselves permission to relax, and so there is a tendency to rush this posture or overlook it entirely.  Done properly, this posture enables the practitioner to absorb the benefits of the yoga asanas and promotes a feeling of deep relaxation, peace and vitality.  In this state, we are better able to combat both the effects of psychological and physical stress.

For Other good descriptions of Astanga Yoga: